skip to main | skip to sidebar

In which Max disapproves of my decorating...

Amazon sometimes feels like it gets me, like when it suggests I buy some butterflies. However, Max does not always agree, and she shows her disagreement by eating my art supplies: 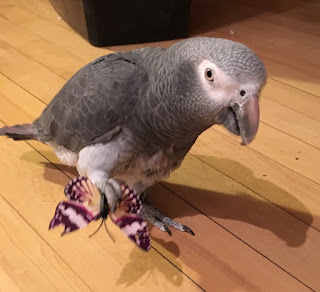 Luckily for me, I was able to use it anyway! 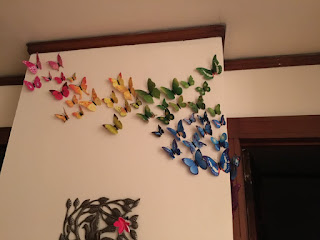 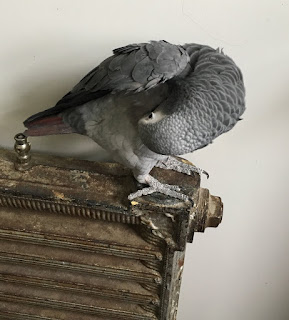 Seen on my run this morning 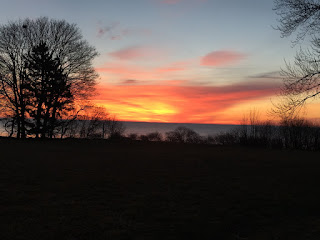 It is so hard to get out of bed to run, but I'm always so happy when I do.  I sometimes feel like I am the luckiest lady in the world!
Posted by Mary at 5:14 PM 12 comments: 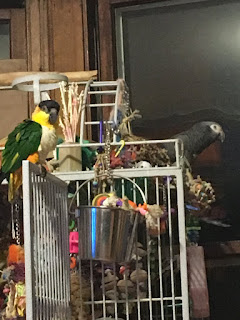 Don't believe everything you see!  Max and Calypso were peacefully on their cages.  I was studying on the couch.  Calypso flew over to her cage, when I snapped this picture.  But he just wanted to be a bully!  After ringing her bell of disapproval, Max climbed down to walk over by me, and Calypso reigned happily until I put him back where he belonged.
Posted by Mary at 5:14 PM No comments: 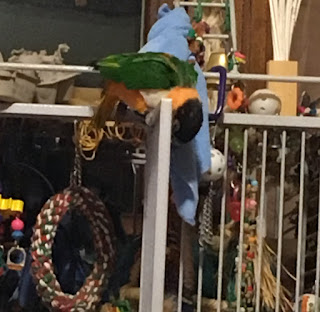 In the wild, Calypso would leaf bathe on actual leaves.  In captivity, he uses new rags and his ingenuity!
Posted by Mary at 5:04 PM No comments:

One of my best friends works as an executive for a local concert venue. As such, I get to see a lot of live music. Tonight, one of my favorite musicians was playing. He was having an off night, so we only stayed for about half of the concert. I got home in time to watch the 9th inning of the World Series. Unfortunately, my only TV is in the same room where the parrots are. And here I confess another deficiency in my parrot ownership (though Max is so happy about this!) -- I woke them up so I could watch what's going to happen. I tried being as quiet as possible, but Max left her sleeping perch to beg to come out: 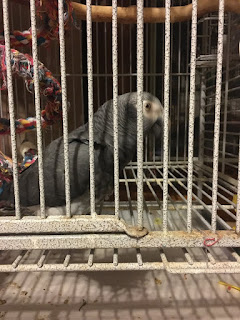 I have owned Max for nearly 15 years, and I have never seen her sleep.  I'd think she didn't need sleep, except for her extreme silence during the night.  She was ready to party, so I let her out for a few minutes, until the game ended.  Indians win!
Posted by Mary at 8:43 PM 1 comment:

And this is why I can't have nice things: 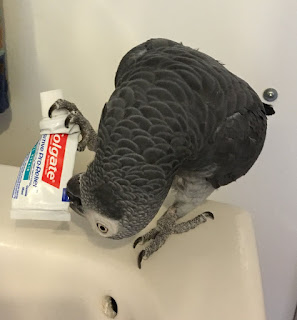 Max gets into everything! She loves the taste of toothpaste. I can't imagine that it's healthy for her, so I try to keep it out of her sight. But sometimes I forget, which means she gets to do this, and I get to spend the next few weeks getting sticky as a bit squeezes out the end of the tube through her minuscule pin prick holes.
Posted by Mary at 5:01 PM No comments:

I'm not even sure it's fair to mention me and the word "blogger" in the same sentence, since I have done so little of it in the past few years. But I frequently think about something I'd like to post here, if only so that I can reflect on life in the future.

So again, I am going to try to recommit to posting more frequently.

This summer has been incredible.  I took level 2 of the CFA exam in June, and found out in July that I had passed!  Only one more level left -- I'm taking it in June 2017 -- and then I will be done with tests forever.  I hope.  Which means that after nearly a year of nonstop studying for levels 1 and 2, I've been enjoying myself, mostly stress-free, this summer.

Max turns 15 next week.  I purchased her from a breeder before I knew about the plight of captive parrots, but it is Max that led me into the interesting world of parrots.  She's sitting on the arm of my couch, a few inches from me, contentedly grinding her beak.  We'll probably spend the next few decades of our lives together, barring any accidents or surprise poor health on either of our parts.

Things with my boyfriend are still going well.  I need a blogname for him!  I'm not feeling particularly creative tonight, so I will simply call him J.  We recently celebrated a year together and are planning a trip to Hawaii in a few months.  Where I will run a marathon (along with some friends) and he will relax.  I will also relax.

A few years back, a man who has become one of my best friends gave me a dozen yellow roses for Valentine's Day.  He was delivering flowers to his husband (my coworker and another one of my best friends, though not quite at the time of this story) and he didn't want me to feel left out.  Since that time, I've saved all of the roses anyone has given me.  J knows this, so he gave me a gorgeous bouquet for our anniversary.  I plucked one out and put it in one of my favorite vases: 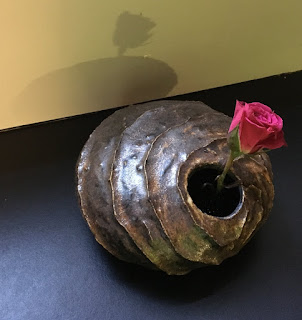 I bought it from a local potter when my art museum was having an art fair, and it brings me joy every day, even while empty.

As I type this, I'm watching the World Series.  Baseball is so calming, and I particularly love playoff baseball.  There is a movie (you can currently find it on Netflix) called "Fastball" that I highly recommend to anyone who loves the game.  I can hardly believe that the Indians made it this year -- I cannot tell you how many times I've watched "Major League" over the years.

Max has flown back to her cage, and is preoccupied with a toy she found in a bucket I attach to the side of her cage, filled with components that have broken off of other toys, like beads.  Calypso is playing happily inside his cage, even though his cage door is open.  I had to trim his beak a couple of days ago, and he may still be holding a bit of a grudge.  He'll get over it :)

As the days get shorter, and the weather colder, I am finding myself already missing summer.  And I have to wait quite a few more months until it appears again.  I've stocked up at my local bookstore, and am hoping to spend many evenings curled up with a good book.

Max has now returned to the arm of the chair, and is daintily trying to get my attention so I will scratch her head.  If I continue to ignore her, she will become more insistent, so I will oblige her before it comes to that.  It's really quite amazing to me the relationship we've formed over the past nearly 15 years.  I can predict how she's going to behave, and she'd probably say the same thing about me.
Posted by Mary at 7:30 PM 11 comments:

Brief update - things are fantastic! - thanks for checking!

I recently received two comments from blogfriends asking if things were OK.  I cannot believe how quickly time flies and that it's been over a year (!) since I've updated.  (And thanks for still caring about me -- I think of the people I met through here often, even if my actions don't reflect that!)

I still plan to start updating this blog more frequently, and will write a lot more after Saturday, June 4.

The past year has been the absolute best year of my entire life.  I still shake my head in amazement sometimes that this life has happened to me, especially when I consider how sad and shocked I was when (what I assumed would be my) lifetime marriage came to an abrupt end.  The me of 4 years ago had no idea that that would be the best thing that ever could have happened!

After going on more than 60 disappointing first dates, last February (2015), I decided to entirely give up on dating and just focus on creating an amazing life.  I became much closer with my friends and family.  My mom and I took a trip to Europe -- a trip she'd been dreaming of for years -- so that she could see where I lived as a high school exchange student 20 years prior.  I decided to pursue an extremely challenging work designation that will skyrocket my career (level 2's exam is on Saturday, June 4, so that's why more extensive updates will have to wait until after that date), which led to a promotion and huge raise.  I ran marathons in more states (12 down, with Maryland, Nevada, and Hawaii coming up later this year.)

Max, Calypso, and Andreas are thriving.  We've been in our house for almost three years now, so they have the routine down and are very happy animals.

While I was out living my life and not dating for over half the year, I met an incredible man and we've been dating for 8 months.  Isn't that so cliche? -- you find what you need when you're not looking for it.  As I'd met my ex-husband so young, I hadn't really had any real dating experience; certainly not as an adult.  What a difference being with an emotionally healthy man makes!  He celebrates my accomplishments, compliments me frequently, and loves baseball -- three things I had no experience with in a partner.

And, he loves the parrots!  Being prey animals, they are necessarily wary of intruders, especially as they've had me to themselves for so many years.  And my boyfriend is 6'3" -- not sure they knew people that tall even existed!  But he is so patient and kind.  He asks to spend time with them without me, finds their favorite types of music and has dance parties with them, and makes sure to give them plenty of praise and treats.  He doesn't get frustrated when it takes them longer to warm up to him, and delights in small progress, like when Max will perch on his hand instead of flying away.

Once I am through with this test, I will have 6 months or so until I have to start studying for the next test (hopefully level 3, the final level, assuming I pass level 2) and I will definitely be blogging much more regularly!  I have had some really fun experiences over the past few years of limited blogging, and would like to have committed them down so I can reread at some point! 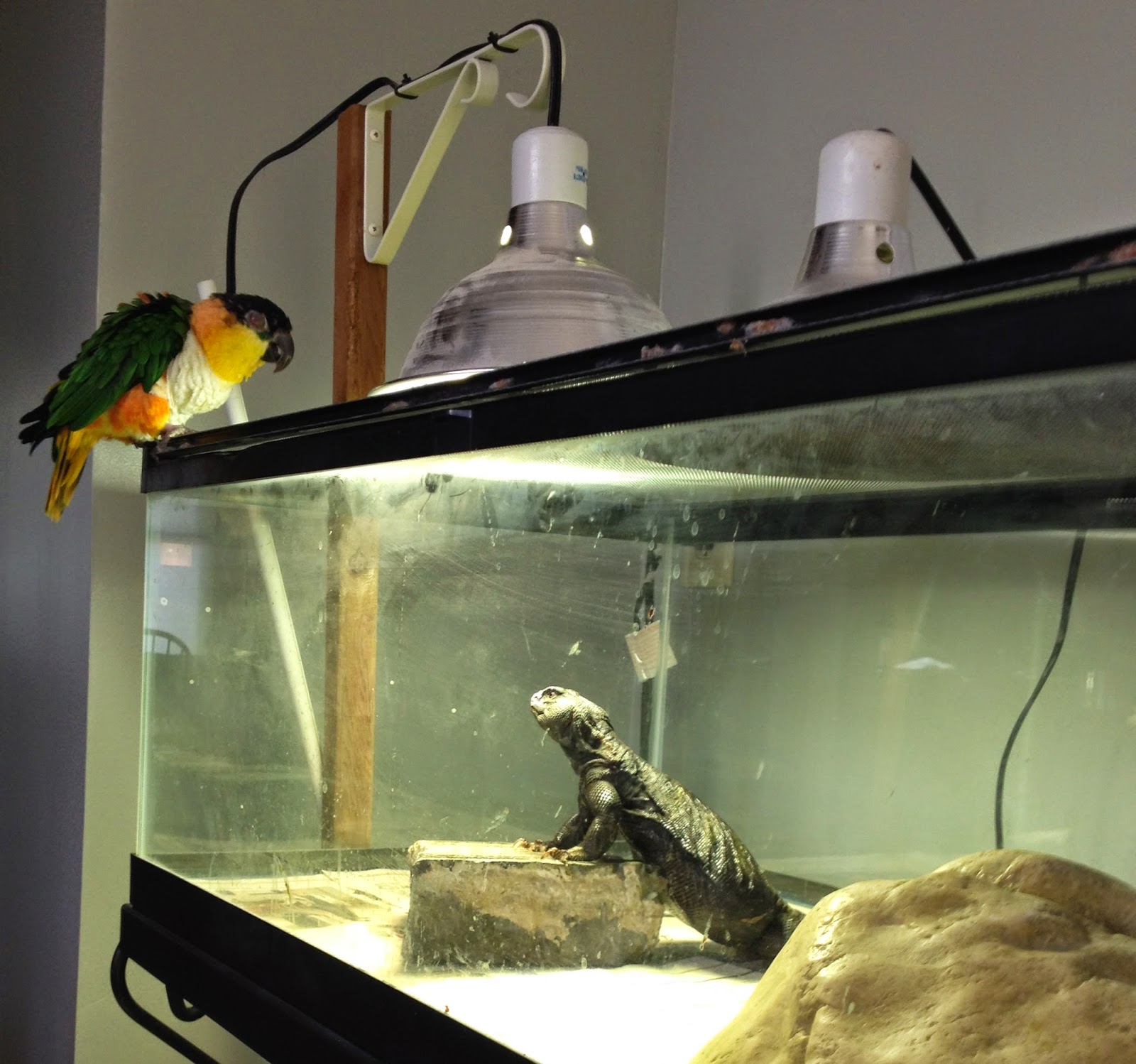 Lost in the divorce

Gone but not forgotten

Are you being cheated on?